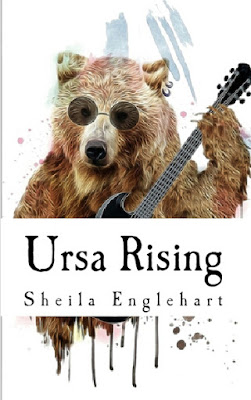 Book Review: Here comes a Rock and Roll tale! Every year around the world numerous rock bands take shape and disband at the same time. What is it that leads to the success and failure of a Rock band?

Vanessa never had a normal childhood. Her father was a Rock star who died in his prime in an unfortunate accident which led the band to call it off and her mother to win a lawsuit against one of the members and get remuneration and settlement money for raising up a little girl. Ten years later she decides to meet the other members of the band for a school project and also out of the curiousity to know her father better through his closest companions.

The story is well-researched and you could feel the life and death of a Rock band and the unusual tales of people behind it. The conversational style of writing is good as it keeps the characters lively but too many dialogues sometimes makes it lengthy in some parts. The plot is exciting but is very predictable until a little before the last pages where there are shocking revelations in the story. Overall it is an entertaining work and would sure remind many of their college days!

What will Vanessa discover on the path to knowing the past? Is it going to satisfy the identity-crisis in her or completely take her off-guard? The Ursa curse- will it repeat itself and most importantly, will Ursa ever rise again?

'Ursa Rising' by author Sheila Englehart is now available on our reviewed books corner. Get ready to Rock and Roll with Ursa!
Posted by Shane West at 21:41:00